Knock, knock!
Who’s there?
Daisy
Daisy who?
Daisy that laughter is the best medicine, and I say, believe dem!

I wasn’t always one for silly knock-knock jokes. In fact, way back in the day, I was the butt of people’s jokes more often than not, mainly because I had an exceptionally large one (and not in a good J Lo way). My “Eat, Pray, Love” moment stalled out on EAT for the first 28 years of my life.  Then I finally decided it was time to pray.

In the most daring move I’ve ever made, I booked myself an open-ended ticket to Bangalore, India to study at an ashram. It was so peaceful, calm and meditative.  And I have to be honest and tell you that I hated every second of it!  Too many quiet, skinny people looking so goddamn Zen that I felt like I wanted to scream!

Then one fateful day, while I was trying my best to meditate in stillness and on exceptionally sore sitz bones, I had enough. I stood up to leave, when all of a sudden I heard laughing outside the window. 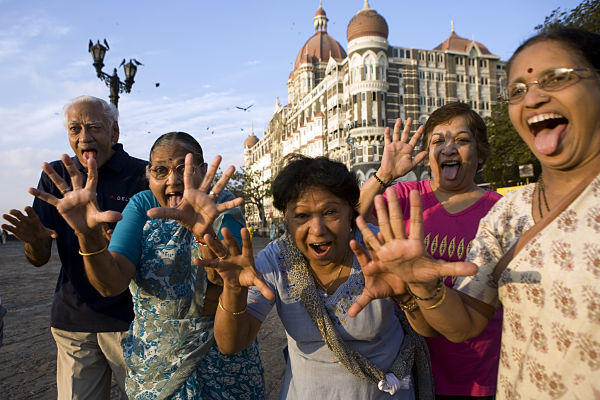 In a trance (or maybe just a prolonged stupor thanks to the incredible cleansing powers of real Indian Curry), I drifted outside and was met with the most amazing sight: A sea of people laughing so hard they were crying!

I had no idea what was so funny, but before I knew it, I caught the laughter bug and couldn’t stop. For the rest of my visit I hung out with my new friends from the Laughter Club of Bangalore.

I lost 40 pounds, and my sitz bones have never felt – or looked – better!  I also met my husband Larraj (and yes, he is the “Larry” in Larry’s Hootcamp!).

Most importantly, I learned that laughter reduces stress, regulates blood flow, and helps reduce cardiovascular disease. Of course it releases endorphins and decreases levels of stress hormones as well.

But aside from all that, just a few weeks later, my abs were tighter, my diaphragm was stronger (hullo, stamina!) and I literally laughed my ass off!

Once I realized laughter isn’t just a happy pill, it’s a complete workout that rivals rowing and other aerobic activities, I returned to the states and create Laughsercise. Even though laughter is contagious, it doesn’t hurt to have instructors who can tell a good joke and lead a kick ass workout, too.